Latin America has become a serious contender in the

global site selection game over the last decade. Corporations are actively setting up operations in the region. Most of these projects stem from the need to consolidate pan-Latin America operations or serve customers in high cost locations like the United States.  Within Latin America, Central America has become one of of the most desirable geographies to locate a variety of operations such as manufacturing plants, IT service centers, shared service centers and call centers.

Cities to consider in the site selection process
A number of Central America cities are viable options for companies looking to set up an operation in the region. Mature cities like San Jose (Costa Rica) and Panama City (Panama) have been at the forefront of the Central America movement, which has caused wages to be higher than other locations in the region. Other cities, such as Guatemala City (Guatemala), San Salvador (El Salvador), and Managua (Nicaragua) have been maturing very quickly while maintaining lower-wage structures. Meanwhile, several emerging markets — San Pedro Sula (Honduras), Tegucigalpa (Honduras) and Belize City (Belize) — have been quietly coming on the radar of corporations. The following table compares several of the key cities in the region: 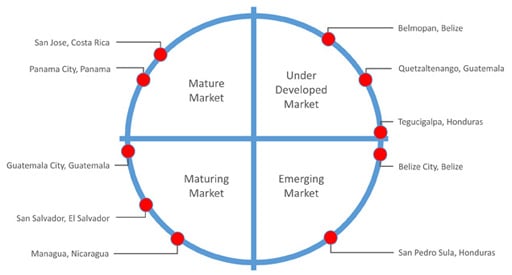 Companies that have expanded in the region
The region continues to attract some major projects from companies across the world. These corporations range from Fortune 500’s to mid-sized companies. The following table identifies where some of these companies have chosen to locate:

The value proposition of Central America

Central America continues to be a valid region of the world to perform a variety of corporate activities at a reasonable cost. Some of the key reasons include the following:

Challenges of locating in the region

Doing business in a Third World country can be challenging. There are many roadblocks that companies will face as they try to expand into Central America. These challenges are often isolated to one country or city; however, they can create hurdles when trying to get projects launched with uncertainty that may exist within all ranks of a corporation as they consider nearshore locations versus offshore geographies. Some of the challenges include the following:

The desire for global expansion continues to push corporations to consider regions like Central America for operations ranging from complex manufacturing to low-end call center operations. The region’s ability to compete globally with other low-cost locations such as Mexico, South America, India, the Philippines and China is the biggest challenge that Central America faces. Overall, Central America offers many desirable attributes that will allow the region to stay competitive in the global site selection game.