Site Selection Group estimates that in 2019 more than $6.08 billion in economic incentives were offered to attract various projects in the United States ranging from office projects, such as headquarters and data centers, to industrial facilities, including manufacturing plants and distribution centers. Incentives are a vital tool for state and local jurisdictions looking for an extra edge to make their communities more attractive and cost effective for competitive projects.

As of the date of publication, Site Selection Group identified 2,437 economic incentive packages offered to companies across the United States during calendar year 2019. This is a decrease of 12% compared to 2,772 announced projects in 2018.

Along with the number of projects, the total value of economic incentives offered in 2019 was also lower than in 2018 — 38% less than the previous year’s $9.8 billion. As noted in the 2018 analysis, the combined awards of $2.2 billion for Amazon’s projects in New York, Virginia and Tennessee, greatly increased the overall amount of economic incentives offered and can account for some of these differences between 2018 and 2019. It is also important to note that the New York offer, which was valued at around $1.5 billion, never came to fruition.

The most utilized type of economic incentives offered during 2019 continues to be tax credits followed by grant and subsidies.

The top industries that received awards from the chart above were manufacturing and business services, which retained their first and second places, respectively. Despite having the largest number of projects, the number of awards declined from the previous year in most of the other industry sectors. The only industry to see a slight increase in the number of awards was construction, which gained eight more deals in 2019 than in 2018.

The following chart depicts the 2,437 projects broken out by estimated economic incentive values:

The chart below shows the top 10 states for the number of announced economic incentive packages offered during 2019 with a total of 1,658 projects, or 68% of the total number of announced projects, but the awards in these states only represent 57% or approximately $3.5 billion of the total economic incentives value of $6.1 billion. Note that it is more difficult to track and report on local jurisdictions; thus, the number of awards in each state is only based on data made available publicly.

The largest economic incentive packages during the year 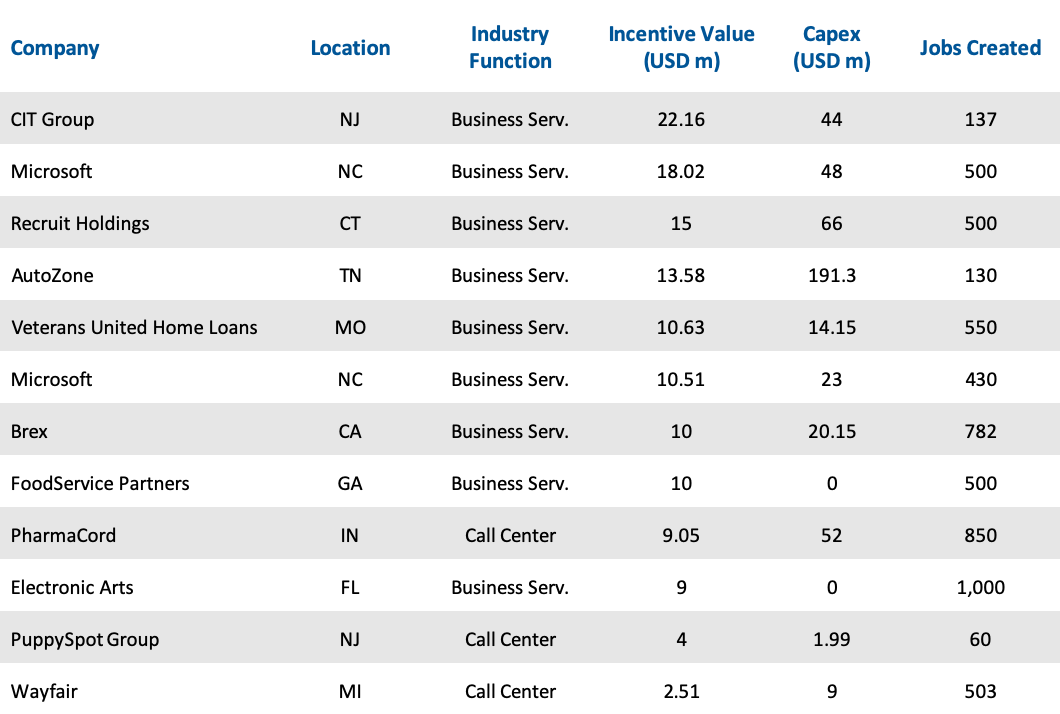 The largest economic incentive of 2019 was awarded to Cree Inc. by the state of New York to support the creation of a semiconductor factory in Utica. In fact, the three largest incentives packages offered in New York have all been for the advanced technology sector including to IBM for the establishment Artificial Intelligence Hardware Center and to ON Semiconductor for the construction of new chip manufacturing plant in East Fishkill. The New York Excelsior program was offered to Cree and ON Semiconductor projects, and IBM was offered a grant from the Empire State Development Corporation.

The second largest project in 2019 was awarded to Annova LNG, a natural gas company that has proposed building a liquefication and export terminal in Brownsville, Texas. When completed, the project will produce 6 million tons of liquified natural gas per year for export from Port of Brownsville.

Two other projects from Texas made it on to the list above.  The largest of the two was a personal property tax rebate to Aviall Services, a subsidiary of Boeing. The incentive was offered to keep the company at its current location at DFW International Airport to retain over 1,000 jobs and add 100 new jobs. The other project, which has received a great deal of publicity, was Uber Technologies. Uber secured an incentive package of approximately $36 million to create its general and administrative corporate hub in Dallas, Texas. The project will create 3,000 jobs and include $75 million worth of capital investment.

The automotive sector secured multiple high-dollar incentives this year. Many high-profile companies in the industry, including Fiat Chrysler, General Motors, Ford, and Goodyear Tire, received large incentives packages. Earning the fourth largest incentive of 2019, SK Innovation, a South Korean company that manufactures electric batteries for vehicles, received over $220 million in various awards for its project that will invest $1.67 billion into a new facility in Commerce, Georgia that will create 2,032 new jobs.

In our article from 2018, it was noted that New Jersey had seen a major decrease in the number of incentives that made it on the list above — going from eight awards in 2017 to a single award in 2018. The trend continued in 2019, when one of its primary economic incentive programs, Grow NJ, expired without replacement in June 2019. This topic will be continued to be tracked by Site Selection Group moving into 2020 as the state determines whether a replacement will be created.

We continue to routinely monitor announced projects to help companies estimate the level and type of economic incentives which may be applicable to future projects.

Please note that the analysis above is based on publicly available data at the time of this article. In addition, the current annual data is compared to the information available at the time of prior annual articles.