A state’s business climate, which includes its tax structure, can influence the site selection process and is among the many things that site selection consultants research besides labor availability and cost, logistics, operating costs, economic incentives, and real estate when determining optimal locations for headquarters, offices, call centers, manufacturing plants, and distribution centers.

The Tax Foundation monitors and ranks state tax conditions in the United States and is a good resource to compare states on their business tax structures. In its “2022 State Business Tax Climate Index,” the foundation identified the best and worst states based on business tax climate and identified several new laws and proposed changes to taxes or tax structures in several states that may be of interest to companies looking to relocate or expand operations.

Companies will often eliminate states early in the site selection process that have burdensome taxes on businesses. Some corporations have even “blacklisted” certain states with high tax burdens or difficult labor laws, especially if it is an employee-intensive operation such as a call center or manufacturing plant. Sales tax rates, meanwhile, are a critical tax especially in e-commerce operations such as distribution centers while property tax rates are critical for manufacturing plants and data centers that have a significant amount of personal property. Economic incentives are an effective way to offset your tax obligations, especially in states with excessive tax rates; however, it is critical to understand the requirements plus any clawback provisions.

Nine of last year’s top 10 states for business tax conditions remained on the top 10 list, with North Carolina, which was ranked 10th in 2021 dropping off the list and falling to 11th. Utah moved from 8th place to 10th while Tennessee catapulted itself into the top 10, landing at 8th place, up from 17th last year. Since 2014, Tennessee has never ranked higher than 14th.

The following 10 states were identified by the Tax Foundation to have the best overall business tax climate:

The primary reason most of these states have stayed on top is that they typically (but not always) lack a particular tax. The following summarizes key factors of why these states emerged at the top:

This year, Tennessee (8th) finished the phaseout of its hall tax, which was levied solely on interest and dividends income. The state doesn’t tax wage income. Now the only remaining vestiges of noncorporate income tax treatment is in the state’s treatment of S corporations and a low-rate gross receipts tax that applies to pass-through businesses, improving the state to sixth-best on the income tax component, according to the foundation. When combined with the worsening treatment of unemployment insurance in other states, this change had an impressive impact on Tennessee’s ranking.

A low ranking in any key category considered by companies and site selection consultants for business relocations and expansions is troublesome. If you are on a “worst” list, you’ll need to come out ahead somewhere else such as getting a good ranking for the lowest labor cost or for the most competitive economic incentives to stay competitive.

States with the least desirable business tax climates tend to have complex, non-neutral taxes with comparatively high tax rates. Compared to 2021, Alabama dropped off the bottom 10 list but only improved to 39th from 41st. Hawaii got added into the bottom 10, moving to 41st but it has consistently been in the high 30s for the past three years.

The 10 worst-ranked states were:

Kansas made the biggest gain in its overall ranking, moving 10 positions to 24th from 34th due to significant reforms to its sales and corporate income taxes. Oregon and New Mexico, meanwhile, both slipped significantly. Oregon’s fall from 15th to 22nd stems from changes to its unemployment tax system, with higher minimum rates and a larger taxable wage base, new Portland municipal income taxes, and the impact of improvements in other states. New Mexico dropped to 28th from 22nd. Legislators there added an individual income tax bracket on income above $210,000, bringing its top rate to 5.9% from 4.9 %.

Recent and proposed tax changes not reflected in the 2022 rankings

A new Arizona (23rd) law should counteract a recently enacted ballot measure raising taxes on high earners in that state. Voter-approved Proposition 208 created a 3.5 percentage point surcharge on taxable income over $250,000 (single filers) to fund education, creating an 8% top tax rate. Senate Bill 1827 curtailed this by establishing an income tax rate cap of 4.5% when the general rates and the surcharge are combined, retroactive to January 2021. Two of the highest individual tax brackets were also eliminated and will be reflected in future indexes.

Louisiana (42nd) approved a rollback of tax rates, reducing the top individual tax rate to 4.25% from 6% and consolidation of corporate tax brackets to three from five, with the top bracket dropping to 7.5% from 8%.

Missouri (13th) passed a law in June that will allow for two additional individual tax reductions in addition to others that were approved in 2014, contingent on revenue conditions.

Montana (5th) adopted reforms to individual and corporate tax structures, including the removal of a marriage penalty that existed in its tax code.

How the rest of the states compared

The following map provides a summary of how the rest of the states compared in the study. 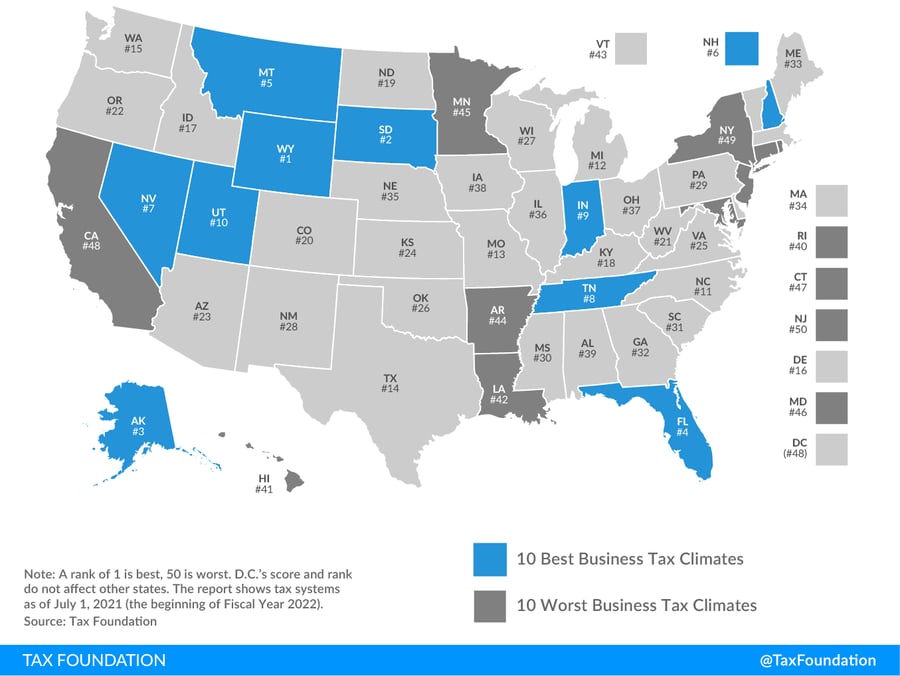 The business tax climate will continue to be a critical factor to consider during the site selection process. Kansas’ 10-point upward move, Tennessee’s improvement to break into the top 10, and New Mexico’s and Oregon’s declines show how rankings can be impacted not only by changes that a particular state might make to its tax structure but also by changes that are being made by other states. Business tax climate is something that companies looking to move or expand will want to research carefully as the impact can be significant.