The following chart illustrates the number of announced call center deals in the United States over the past 10 years:

Announced Deals Over Past 10 Years 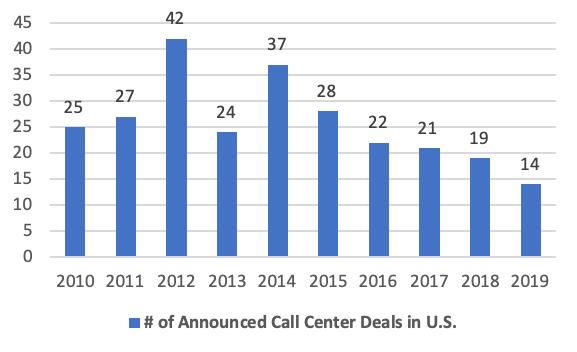 Economic Incentive Value Over Past 10 Years 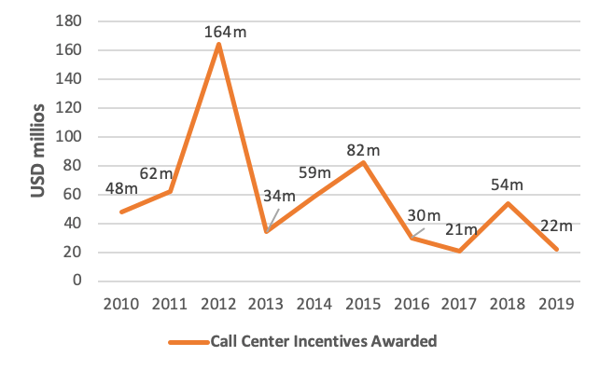 The primary incentive programs utilized in each project listed above will be recognized over a 10- to 12-year period and are performance-based. Thus, the actual value associated with these awards is dependent upon meeting certain headcount and wage thresholds.

The prior five years, which represent 105 deals, yielded the following net new jobs and average economic incentive award per job in the U.S.:

On average, economic incentive awards for call centers generally yield $1,000 to $5,000 per job. The information above over the past five years tends to support this range, except for a couple outliers. The peak in the average economic incentives per new job created in 2015 was larger than the others based primarily on Google’s data center project in Iowa and Atlantic City Contact Center’s new call center in New Jersey. The peak in 2018 is based on the previously mentioned projects. What this information reflects is how different incentive programs can be from one state to another and how the structure of the program ultimately determines realizability. Larger awards generally result from incentive programs that are linked to payroll, either via a direct rebate of payroll or withholding, versus tax credits and are in geographically favored areas.

The future of economic incentives for call centers

Over the past few years, not only was there a reshoring trend for call centers, but companies’ expansion plans have occurred within the United States as well. Historically, a lot of the call center industry’s growth was in nearshore and offshore locations primarily for cost-savings reasons, but companies have recognized they may have underestimated the value of customer service. Customer loyalty is paramount, and a customer wants to know they are talking to someone who is not physically distant and who has product knowledge. Connecting with a customer service agent provides a psychological edge and brand loyalty to a customer that outsourcing cannot provide. Thus, call center activity continues to grow in the U.S., but economic incentive awards are on the decline.

Not all call center jobs are created equally. Some jobs are in the health care field and may require licensure, some may be software engineers, some may be non-degreed customer service representatives. The varied range of qualifications results in a broad array of wage ranges. Since the economy is booming, unemployment is low and minimum wage requirements are increasing, economic incentives are not being offered as often to jobs paying less than $12 per hour. Moreover, in many cases the minimum threshold is $14 per hour, or more likely, the average county wage of all industries in the respective county.

Not only are wage pressures affecting the availability of incentives for call centers, but so are companies’ objectives of cost-cutting measures around real estate portfolios. Many companies are reducing their physical footprint and utilizing flex/hoteling space concepts or remote workers. This has an affect on the number of net new employees tied to a facility and a company should be prepared to demonstrate to a community the revenue impact it will bring and/or maintain despite maintaining a more transient workforce.

There are still economic incentives for competitive projects throughout the United States; however, in the case of call centers, the realizability and significance of those incentives will be heavily dependent on the project facts and circumstances. Site Selection Group has decades of consulting experience in this field and is always available to discuss your project and the availability of economic incentives.

Note that the statistics used in this blog are based on information available at the time of publishing and are generally based on state level incentives.