The largest announced economic incentive package this quarter was offered to Linear Labs by the State of Texas to build an advanced, smart manufacturing plant in Fort Worth. The company accepted a performance-based grant of $68.9 million from the city of Fort Worth over a 15-year period. The company plans to invest $618 million to build a 500,000-square-foot facility and create 1,200 new jobs.

The 305 announced projects during the second quarter represented 28 states, led by Michigan with 47 announced projects and Kentucky with 36. North Carolina and California offered the largest value of announced economic incentives with $111.7 million and $105.5 million, respectively. The incentives offered by North Carolina included Bandwidth Inc. — a project that is set to create more than 1,100 jobs with $103 million in capital investment at its Raleigh headquarters — and 26 other projects.

The following chart depicts the number of projects announced during the second quarter broken out by estimated economic incentive value:

The following chart depicts the breakdown of the 305 announced projects during the second quarter of 2020 by industry function:

Manufacturing continues to be the top incentivized industry function this quarter. The top industry sectors for total estimated capital investment were the Industrial Goods and Electronics sectors, which together account for nearly 50.2% of all the investment announced during this period. The Industrial Goods sector was led by DesertXpress, a manufacturer and operator of passenger train systems, which will invest $2.18 billion to establish a new facility and purchase manufacturing equipment in Victorville, California. 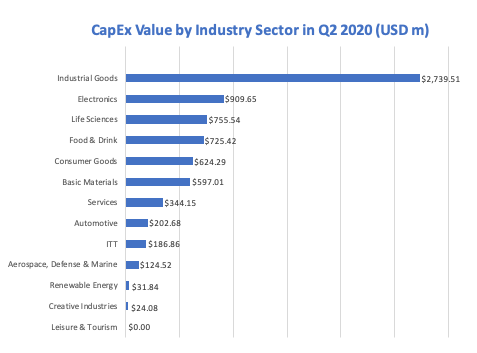 The top 25 economic incentive packages announced in the second quarter represent approximately $363 million of the total $498 million of estimated incentives for all projects, or approximately 72.9%. These projects in isolation will account for:

The following table identifies some of the largest economic incentive deals (removing real estate development and film incentives) offered in Q2 2020. These projects provide a great way to benchmark the potential range of economic incentives for a variety of project types. However, it is important to understand these values are estimated and typically only reflect state level incentives.

Most projects are not nearly as sizable in terms of incentives offered as the top 20 highlighted above. Thus, we like to share notable Q2 projects garnering economic incentives in the business services and call center industries:

As noted above, the overall metrics of Q2 2020 are lower than Q2 2019. The decline in the total number of projects and other incentive metrics all likely reflect the impact of the economic disruption caused by the coronavirus pandemic. The start of this trend appears to have begun in the last month of Q1, when widespread shutdowns and occupancy restrictions were implemented nationwide. At this time, the long-term effects of the pandemic on economic incentives are yet to be determined. The ramifications of the virus will hinge on the domestic and international response to the pandemic and the speed of economic recovery.

We encourage companies to review their economic incentive portfolios amid this pandemic to ensure they are staying in compliance with project commitments. Site Selection Group can assist with reviewing economic incentive agreements and interfacing with governmental officials as needed.