As we head into the second half of the year, states are reviewing their tax structure and economic incentive programs to remain competitive. Some states developed creative incentives to equitably award large projects stemming from megaprojects, while others have tweaked existing tax laws and/or incentive programs to make them more impactful to companies overall. The summary below captures a variety of updates spread throughout the United States.

Every jurisdiction is eager to win the next mega project for several obvious reasons. One important reason is that communities realize that the spinoff effects of such projects are equally transformative. Suppliers are known to relocate near their customers and sometimes are required to do so to maintain their business relationships.

From an economic incentive perspective, it is common that the largest incentives are awarded to the companies who commit to a jurisdiction first. The reason for this is because it is difficult for trailing suppliers and third-party vendors to attest that “but-for” an award of economic incentives they would not locate within the jurisdiction. While this may be accurate, it undervalues the economic impact of these tangential investments.

However, where does a community draw the line in offering incentives? Do they only offer incentives to a set number of the new suppliers or only to new projects announced within a certain time frame? Ohio and Kansas have undertaken the task of standardizing economic incentives for megaprojects and their suppliers due to their recent wins of Intel and Panasonic, respectively.

In addition to the billions of dollars offered to Intel, the following summarizes the megaproject tax incentives Ohio will offer certain suppliers of a megaproject:

To qualify for these incentives a business must either operate a megaproject or sell tangible personal property to one. A megaproject is a development project that satisfies all the following conditions:

Suppliers of megaprojects are eligible for the incentives if they make at least $100 million in fixed-asset investments in Ohio and create at least $10 million in annual Ohio employee payroll and maintain that level of payroll throughout the term of the JCTC as a qualifying megaproject supplier.

In addition to a megaproject, five qualifying suppliers are eligible for the following benefits:

This legislation was clearly targeted to win Panasonic’s $4 billion electric vehicle battery manufacturing facility, as can be seen from the fact the APEX program only allows for one qualifying firm to be approved in each calendar year, limits benefits to five suppliers, and the program sunsets on December 31, 2023. In addition, APEX incentives for a qualifying firm or supplier, which must be approved by the State Finance Council, are mutually exclusive with other statutory programs such as the Promoting Employment Across Kansas program (PEAK), Kansas Industrial Training (KIT), and the High-Performance Incentive Program (HPIP).

A multistate corporation is required to distribute its income, for state corporate income tax purposes, among the states in which it does business. This process is known as “apportionment” of business income. States generally apportion income in three primary ways:

While the traditional model for apportionment was the three-factor formula, most states have now adopted a single sales factor. The rationale for this was based on the premise that apportioning income to a state based on property and payroll was akin to penalizing a company for investing capital and employing residents within a state’s boundaries.

The chart below shows state apportionment formulas for 2022, as reported as of January 1, 2022: 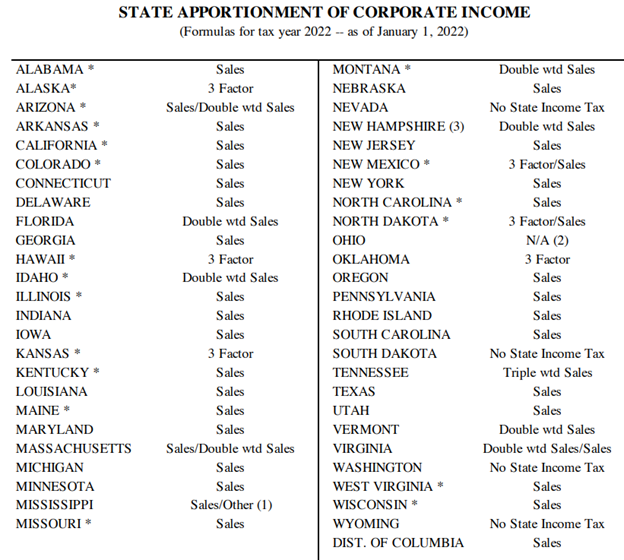 Often a single sales factor methodology is more favorable to multistate corporations who export their products or services from the state in which they have a physical presence; thereby reducing their state income tax liability. The consequence of such change is that it can also devalue existing and future income tax credits.

Notably, California is allowing another grant allocation similar to the one released at the beginning of 2022. According to statute, eligible applicants for the grant program must meet at least one of the following criteria:

Additional background, eligibility, and application details can be found online at https://static.business.ca.gov/wp-content/uploads/2022/07/CalCompetes-Grant-Solicitation-FY-2022-23.pdf

In addition to the APEX program described above for megaprojects, Kansas made other program adjustments as well.

To qualify, a company must be either a manufacturer or able to document that most of its sales are to Kansas manufacturers and/or out-of-state businesses or government agencies and pay above-average wages.

In 2021, Senate Bill 65 removed the requirement to participate in the Kansas Industrial Training or Retraining program to qualify. Moreover, projects placed in service after January 1, 2021, are allowed to sell or transfer up to 50% of HPIP tax credits. A taxpayer can sell or transfer credits within a single tax year and may request up to two transfers within that year.

The remote workforce in Kansas

Kansas is being flexible in allowing remote workers to qualify for incentive programs. An employee must pay withholding to the state, be included on Department of Labor reports, and be listed on the facility’s payroll. Permanent full-time or part-time employees working a minimum of 20 hours per week and offered adequate health insurance where 50% of the premium is covered by the company are eligible. The facility must be solely leased or owned by the company.

The Comprehensive Tax Cut Act of 2022 was passed by South Carolina on June 15, 2022, and includes the following benefits:

A primary economic incentive tool in South Carlina is a fee-in-lieu-of-tax (FILOT) which reduces the 10.5% assessment ratio to 6%. Thus, this new exemption negates the need for a FILOT in the short term; however, a FILOT reduces the assessment ratio for an extended term, e.g., 30 years or 40 years, locks in the millage rate and may also include special source revenue credits against FILOT payments. It will be interesting to see how manufacturers with new projects will value the exemption versus the FILOT, as they are mutually exclusive, since the exemption may be more impactful in earlier years.

States continue to be creative in trying to win and incentivize megaprojects, while also trying to reduce overall state tax burdens. Thus, it is important to continually monitor legislative updates, especially when looking at locations for new or expansion projects.

For additional information about these updates or programs, please contact me at krendziperis@siteselectiongroup.com with any questions.