Fueled by the growth of cloud computing and digital storage, the data center market has seen tremendous growth in the last few years. As the knowledge economy and other sectors continue to grow, the demand to build more centers has kept a constant stream of investment going toward the construction of these sites. To keep pace with the commotion, many state governments and economic development organizations have begun to move the attraction, retention and redevelopment of these investment goldmines higher on their list of priorities.

The most recent legislative season has led to the adoption of new economic incentives in several states for the data center industry. This is a continuation of trends seen nationwide for over a decade now, as communities realize the full impact that these projects have on their tax bases and local economies.

The role of incentives in data center site selection

When deciding where to locate a project, site selectors will pay close attention to the incentive offerings of the different communities and states on their short list. Typically, whenever a site is being chosen for a data center, there will be a stringent list of requirements that must be met. The majority of these factors are purely geographical; including proximity to preexisting telecommunication networks, the immediate regional demand for data storage, and even the natural hazards that some environments might pose to their energy supply or cooling costs.

Interestingly, one prominent site selection driver, labor availability, will typically play a diminished role in the site selection process for data centers. This is because these projects tend to create very few permanent jobs as they only require a small group of highly qualified specialists to stay operational. This removes one of the primary tools of attraction for a local community, which often relies on its workforce to set itself apart from other competing locations. In its place, many communities have turned to economic incentives to level the playing field.

The state of Illinois recently introduced a new class of incentives specifically targeted toward data centers. In the spring of this year, the legislature passed a provision that would enable new projects to be exempt from sales tax on qualified equipment, a critical tool for this industry. In order to qualify, a project must invest a minimum of $250 million and employ 20 full-time employees within a set five-year period. The drive to attract more data centers projects has been encouraged not only from the high-tech sectors, but also by the construction industry, which would stand to greatly benefit from the influx of investment money and creation of new jobs to build these sites.

Neighboring Indiana also passed a bill in this year’s first session, making major modifications to the existing Senate Act No. 302 from 2012. This new bill streamlines the qualification process for companies, removing provisions from the previous law which would require the designation of a “high-tech district” to be made for a company located within that area to qualify for personal property exemptions. Without this additional requirement, any data center project investing at least $25 million in real and personal property can now qualify for this exemption. The changes do not stop there, as the state has also approved a law that would allow them to offer sales tax exemptions on equipment used in the facility, electricity charges and construction costs. This incentive will only be open to projects investing between $25 million and $150 million within five years, with the length of this exemption lasting for 25 years. However, if a project exceeds $750 million in total investment, then the length of this exemption will be doubled to a maximum period of 50 years. These new changes are a major win for the state and will make them incredibly competitive with other communities.

Alabama also pushed through legislation aimed at the attraction of advanced technology projects to the state. House Bill 540, also known as the Alabama Incentives Modernization Act, passed through the state legislature near the end of May and although it is not targeted exclusively at the data center industry, it adds to the preexisting roster of attractive incentives for the industry – including the Data Processing Center Economic Incentive Act of 2012 which offers a full tax abatement on ad valorem county and municipal taxes for data centers. This new bill will introduce incentives geared toward the location of high-tech projects to rural and low growth communities by loosening the qualification requirements and increasing the maximum possible awards from the Alabama Jobs Act. Although it is unlikely to be a major factor for the site selection process of data center projects, it does showcase the state’s ongoing commitment to attracting and retaining these kinds of companies, with future legislation expected to continue this trend.

One program of note is the Ohio Data Center Tax Abatement Program. This incentive requires investment numbers of $100 million or more in a three-year period and a total annual payroll greater than $1.5 million. If the project meets these thresholds, it may be eligible for a total or partial exemption on all sales taxes on the purchasing of data center equipment. The state also has provisions in its program that allow for agreements to be made with multiple taxpayers, increasing the incentive’s competitiveness in a market more focused on colocation data centers.

Michigan is a recent adopter of incentives focused on data center development, with the passage of an exemption in sales-and-use tax for assembly, use or consumption in the construction and operation of data centers and colocation sites in early 2016. The state has been experiencing a boom in the data center industry, with the last 10 years taking it from 18th in the number of data center businesses to fourth in 2018. Although it is still too early to determine the long-term effects these new incentives will have on investment, it has been seen as a viable strategy to keep this positive momentum moving in the right direction.

The Virginia Economic Development Partnership and the Department of Taxation manage the state’s Data Center Retail Sales & Use Tax (DCRSUT) Exemption. Projects that invest $150 million in new capital and create 50 permanent jobs that are paid at least 150% of the average local wage will be qualified for this incentive. For projects located in enterprise zones, this job requirement is halved to 25, creating a strong motivation for projects to locate in disadvantaged communities. Like Ohio and Michigan, the tenants of colocation data centers can also participate in these agreements.

The state of Texas finds itself in a rather unique position among the top players of this industry. Like California, it boasts a massive economy fueling the demand for data center projects. But unlike its West Coast counterpart, Texas has elected to provide economic incentives as a way to further fuel growth.  House Bill 1223, passed in 2013 by the Texas Legislature, was a bill designed to offer an exemption of the state’s sales-and-use tax on electricity, electronics, machinery, software, cooling systems and various other items used in the center. To qualify, a data center must be at least 100,000 square feet in size, have a capital investment value of at least $200 million, and employ 20 employees at a wage at or above 120% of the county average. However, this program has not been without its critics, which typically find the state’s focus on single-owner data centers to be antiquated and in need of an update to keep in line with the current market trends.

Arizona is unique due to its flexible approach and less stringent qualifications compared to some of the other states. The capital investment requirements for a data center project to qualify for benefits range from $25 million and $50 million over five years. If this is met, an exemption on transaction privilege tax and use tax can be offered at the state, county and local levels for equipment purchases. The strategy appears to be working well for the state, with Phoenix consistently ranking as one of the most in-demand metro areas in the country.

Although the states above have been highlighted, that is not to say that other communities are less competitive. In fact, most states across the country have some form of economic incentive geared toward or tailored to data center projects, as shown below: 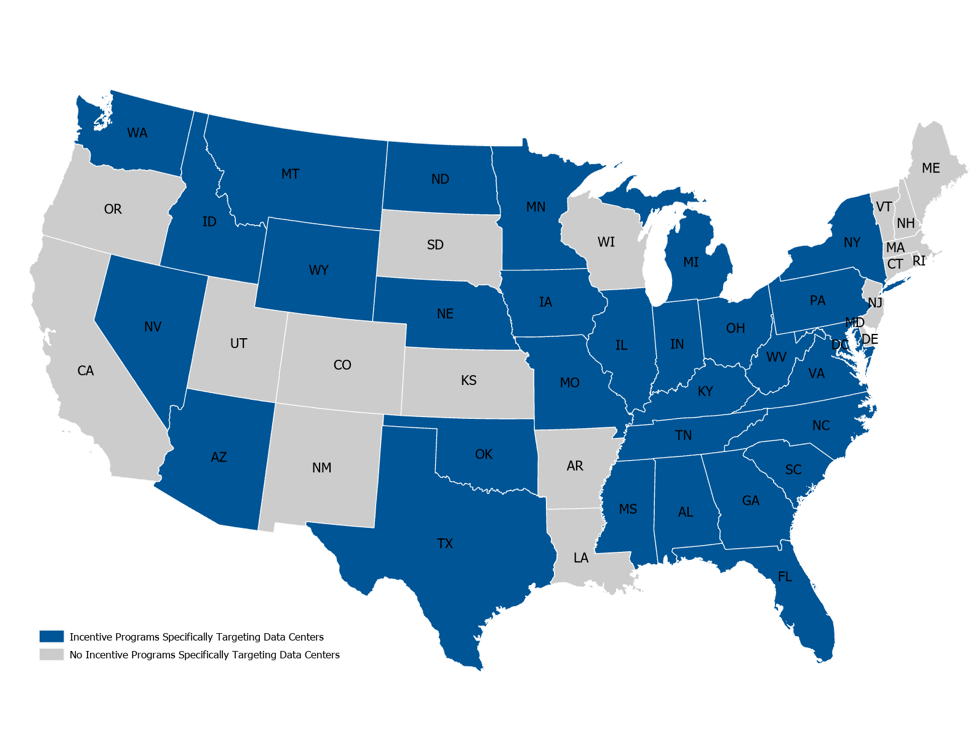 However, incentives are not the only factor when selecting a site. No state emulates this more than California, which lacks any sort of formal incentive program for data centers, but still saw some of the largest total growth in the last 10 years. This comes as little surprise to most observers, as it is home to Silicon Valley and, therefore, has the demand to drive business its way by sheer market force alone. To imitate this would be impossible for most of the country, so to remain competitive others turn to the tools of economic incentives. Many states that have adopted a more active approach to the recruitment and retainment of data center projects have found success and increased opportunities that would otherwise be afforded to a select few communities, seemingly making it a viable strategy for growth across the country.