Impact of AMLO Border Policies on Site Selection in Mexico

When Mexico’s new populist president, Andrés Manuel López Obrador(AMLO), was elected last summer, he vowed to create an environment that would make Mexico’s northern border cities more competitive with their U.S. counterparts.  Specifically, he announced his intent to create the largest free trade zone on the planet by designating a 25 km (15.5 miles) swath of land along Mexico’s 2,000-mile border with the U.S. as the recipient of new “advantageous” policies, which in some cases provide economic incentives of sorts, for companies which locate in Mexican border towns.  When he took office in December 2018 — he began pursuing these policies:

This article explores the potential impact of these policies on site selection in Mexico, particularly for manufacturing projects.

Reduction in Tax Rates for Companies Locating in Border Cities

Manufacturers who make products for export from Mexico (maquiladoras) can already gain an exemption from paying all value added taxes (IVA), by obtaining a special certification from Mexican Aduanas (Customs Department).  As a result, we do not expect this policy to simply reduce the rate will play a significant role in site selection decisions.   This new policy, however, will likely be beneficial to Mexican consumers who spend billions of dollars each year in retail stores located in U.S. border cities. Now these shoppers from Mexico may decide to make more purchasing decisions in Mexico.

The reduction of the federal income tax rate (ISR) by one-third to 20% could be attractive to companies undertaking site selection studies that evaluate both interior and border locations, especially if all other operational factors are substantially equivalent. We should point out, however, that companies will be required to meet some very rigorous standards in order to qualify for the reduction.

Some estimates indicate that these new tax policies could initially decrease revenue to the Mexican federal government by as much as $6 billion (USD) annually.

Reduced fuel prices would offer a substantial boost for Mexican citizens living on the border, giving them the opportunity to fill their cars’ fuel tanks in their home country at a competitive price. If these policies ultimately led to reduced electric rates, this would certainly boost manufacturing in Mexican border towns. Electric rates in Mexico are almost always higher than U.S. locations analyzed by Site Selection Group and can range from $0.12 to $0.25 per kWh when all fees and taxes are added to the bill. As happens in the U.S., the price of electricity hinges on the size of load and the utilization profile of the customer — favoring those companies that utilize power 24/7. Mexico is making legitimate attempts, however, to reform their energy sector by allowing more private and foreign direct investment, so we expect to see prices come down over time and are already seeing some signs that this is happening.

Manufacturers who export their products from Mexico (maquiladoras) already receive highly favorable customs/duty treatment, by importing raw materials and equipment duty-free.  It appears the president seeks to eliminate any duties that may remain for border mnaufacturers.  Again, we do not yet see a significant impact on site selection resulting from this policy.

The fifth policy, related to the daily minimum wage, is the one new policy that Site Selection Group is watching most closely. The AMLO administration announced in mid-December that the daily minimum wage would be doubled to 176.72 pesos ($9.25 U.S.) for all border cities, thus fulfilling one of the new president’s campaign promises.  The administration also announced that the daily minimum wage for cities in the interior would be increased to 102.68 pesos ($5.37) — a 16.2% increase from the previous year, and the third consecutive year of double-digit increases.  Both of these policies took effect on January 1.

In reality, most of the 5,100 companies participating in Mexico’s “maquila” industry nationwide were already paying wages, bonuses and benefits that exceeded the newly mandated minimum wage. Many of the 2,400 such manufacturers located in border states expected that the new policy would exert upward wage pressure and began to adjust their salary structure in preparation for the new law, months before it actually went into effect. Late last year, Site Selection Group began to receive anecdotal evidence that border manufacturers were planning wage increases ranging from 5% to 20%. The preliminary data is now in from INEGI (Mexico’s census bureau) and we can clearly see the impacts of the new border policy.  Bottom line — every border community is experiencing historically high wage increases at the start of 2019.  From January 2018 to January 2019, real wages and salaries for all maquila workers increased by 4.8% nationally. Six of Mexico’s 32 states, however, had wage increases higher than the national average, four of which are on the northern border with the United Sates. In fact, four of the six border states experienced wage increases that were dramatically beyond the national average.  See chart below. 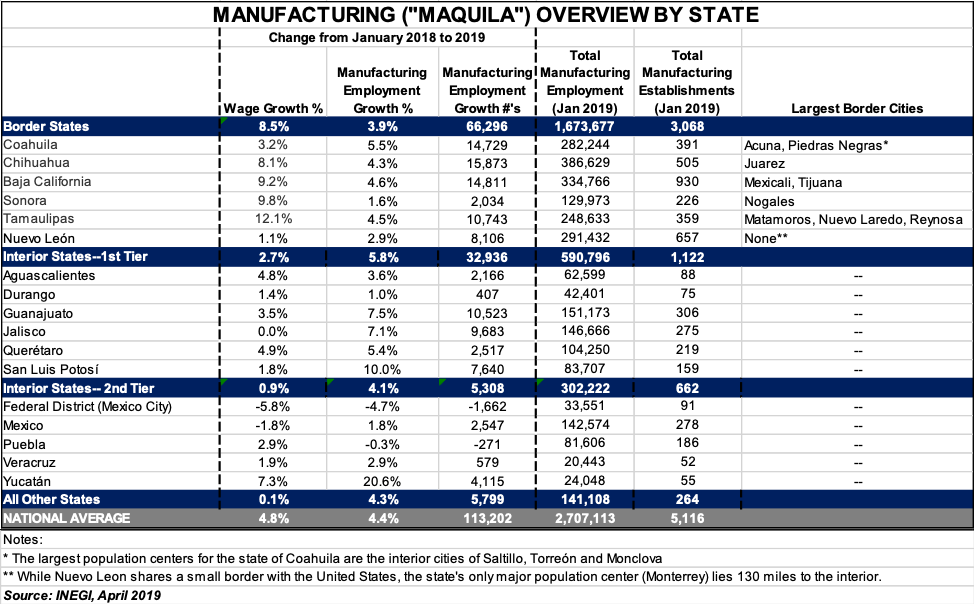 Wage increases in the border states of Coahuila and Nuevo León were an anomaly, increasing by only 3.2% and 1.1% respectively. These rates were lower principally because each state’s larger population centers) in the state of Coahuila (Saltillo, Monclova and Torreón) as well as the state of Nuevo León (Monterrey are not located in the border zone and therefore not subject to the new policy. Coahuila’s largest border city (Cuidad Acuña) saw wage growth come in at 16.2% year over year according to INEGI data.  All but onre of the remaining border cities reported wage growth of at least 12.1%.  Wage growth in Matamoros, in the eastern border state of Tamaulipas, was the lowest among all border cities at 6.4%, but still significantly higher than the national average.  It is also important to note that due to union problems in Matamoros, it was the only border city that actually lost jobs (net loss of almost 1,100 production workers and technicians) from February 2018 to February 2019. We should note, however that in February 2019 year-over-year wage increases in Matamoros were significantly higher than all other seven border cities that we analyze, coming in at well over 30%, indicating that the increases in that town just occurred one month later than the other border cities and were perhaps influenced by more than 20,000 workers that went on strike in January. With only a few exceptions, these are the most significant 12-month gains in wages we have witnessed in Mexican border communities over the past 12 years.

While the new border policy clearly is pushing manufacturing wages upward in Mexico, there also appears to be other factors at play. Border cities continue to be the recipients of the largest  manufacturing employment growth in the country. Mexico added 113,000 manufacturing (maquila) jobs last year — a growth rate of 4.4%. Almost 60% of these jobs came to border states and at least 46,000 (41%) were added specifically in border towns. Almost one-third of the national manufacturing job gains went to three border cities — Juárez (+13,161) Reynosa (+12,196) and Tijuana (+10,108). 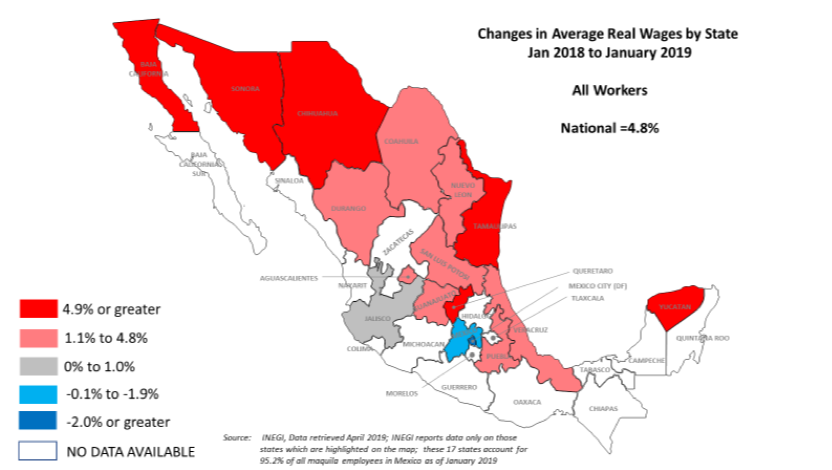 Even with these increases in border wages — average real manufacturing wages for manual and technical workers are below the national average in three of the six border states — Chihuahua, Sonora and Tamaulipas.  In January, the reported wages for manual and technical workers in the states of Baja California, Coahuila and Nuevo León were 3%, 7% and 13% (respectively) higher than the nation. We note that large automotive OEMs in Coahuila (GM and Chrysler) and Nuevo León(Kia/Hyundai) tend to exert at least some of the upward pressure on wages in those two states.

There are several things that SSG will be watching closely in the coming months.

Nationally, average wages paid by maquiladoras decreased by 4% from January 2019 to February 2019, a trend which we have seen in 10 of the last 11 years. Typically, average wages will bottom out in February and then increase gradually (2-4% per month) until December.  December is traditionally the highest month as employers are paying out Christmas bonuses and other year-end cash bonuses. Wages tend to be lower in the first two months of the year as employers are bringing in higher numbers of new potential employees to deal with high post-Christmas labor turnover.  In a typical year, Site Selection Group has observed an average swing of 24% from February to December nationally and 14% to 25% in border cities.

We will monitor trends and continue to speak with border manufacturers in the coming months to answer this question. So far, Site Selection Group has had only one client that has eliminated consideration of the border, in part because of the uncertainty of where wages may be headed.

For the time being, we do not think so. For most border cities, wages for manual and technical labor still remain lower than their counterparts in the interior of the country. Cities like Tijuana, however, which pay higher than the national average could be attractive to workers from the interior. We will be interested, however, to see if companies operating in Mexico’s interior increase their wages to mitigate against any potential migration of their workforce to the north.