When discussing workforce trends related to manufacturing and distribution-oriented occupations, the topic of automation and its impact on American jobs usually seems to work its way into the conversation. In a previous article, Site Selection Group, a full-service location advisory, economic incentives and real estate services firm, examined the effects automation has on the distribution industry. Although many are under the impression that automation has significantly impacted the number of distribution center jobs, the data suggests that notion has yet to fully materialize but is likely headed in that direction.

To gain a clear understanding of the impact automation is having on the entire industrial sector, Site Selection Group researched the topic for production-oriented occupations.

Robot use is growing and prevalent in regions with significant automotive production
The Brookings Institute published an article on Aug. 14 that shared their research highlighting the markets with the highest concentration of robots relative to the workforce. The following table shows the result of Brooking’s research and includes the top metro areas that have the highest number of robots per worker, as well as those with the lowest concentration of robots.

Not surprisingly, the top metro areas with a high concentration of robots are mostly those with an established automotive production industry. This includes markets in Midwestern states such as Michigan and Ohio, as well as Southeastern states such as Tennessee, South Carolina and Mississippi.

Interestingly, the compounded annual growth rate of total robots from 2010 to 2015 is relatively consistent across all metro areas, irrespective of their robot concentration per worker. This growth rate ranged from 16%-28%, indicating that robot use has been adopted at a fast rate across the entire United States.

Companies create jobs and invest in robots in the same markets
To get a better understanding of the impact robot growth has on production job growth in a market, Site Selection Group calculated two metrics, and then compared both to draw conclusions (data included in the chart below). The first metric measured robot growth relative to job growth from 2010-2015. For example, the number of robots grew 13.7 times faster than production jobs in Knoxville, Tennessee from 2010-2015. 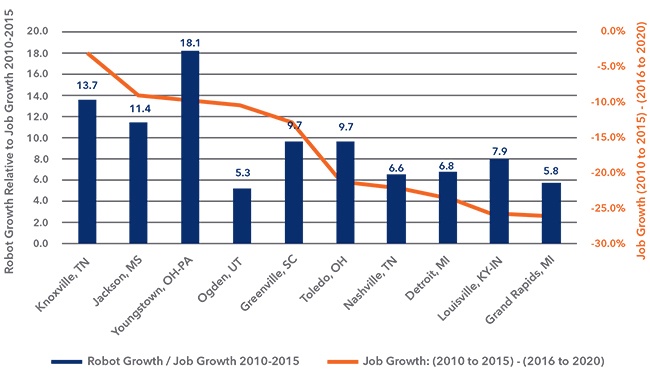 After evaluating these 10 metro areas with the highest concentration of robots per worker, one trend is clear: Metro areas that have experienced the fastest growth in the number of robots are those metro areas that are experiencing a slower reduction in production job growth. Simply stated, companies are creating jobs and investing in robots in the same markets.

Why automation in production matters in the industrial site selection process
The rate in which manufacturers are incorporating the use of robots into the manufacturing process is staggering, but what should companies consider when evaluating their corporate site selection decisions? Leveraging our extensive experience assisting production clients with plant expansions, relocation, and consolidations, Site Selection Group has identified the following three reasons companies should keep their eye on the topic of automation during the site selection process: