Site Selection Group estimates that in 2018 more than $9.8 billion in economic incentives were offered to attract various projects in the United States ranging from office deals, such as headquarters and data centers, to industrial facilities, including manufacturing plants and distribution centers. Incentives are a vital tool for state and local jurisdictions looking for an extra edge to make their communities more attractive and cost effective for competitive projects.

As of the date of publication, Site Selection Group identified 2,772 economic incentive packages offered to companies across the United States during calendar year 2018. This is a modest increase of 6 percent compared to 2,613 announced projects in 2017.

The total value of economic incentives offered in 2018 was slightly lower — 3 percent less than 2017’s $10.12 billion. Not surprisingly, the combined awards of $2.2 billion for Amazon’s projects in New York, Virginia and Tennessee accounted for three of the top 25 deals in 2018.

The most utilized type of economic incentives offered during 2018 continue to be tax credits followed by grant and subsidies.

Manufacturing continued to be the most awarded industry sector as shown in the chart below: 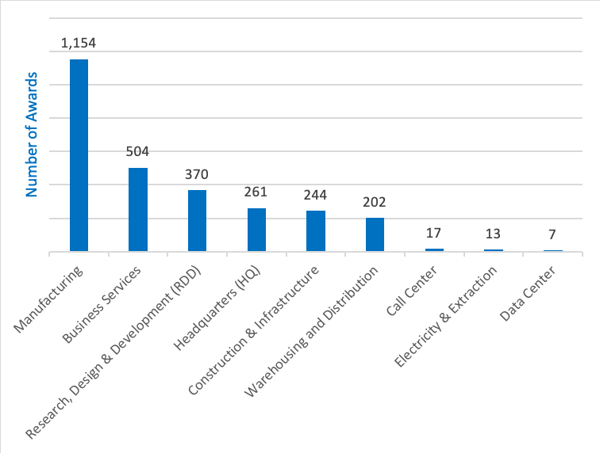 The following chart depicts the 2,772 projects broken out by estimated economic incentive values:

The chart below shows the top 10 states for the number of announced economic incentive packages offered during 2018 with a total of 1,934 projects, or 70 percent of the total number of announced projects, but the awards in these states only represent 57 percent or approximately $5.6 billion of the total economic incentives value of $9.8 billion. Note that it is more difficult to track and report on local jurisdictions; thus, the number of awards in each state is only based on data made available publicly. 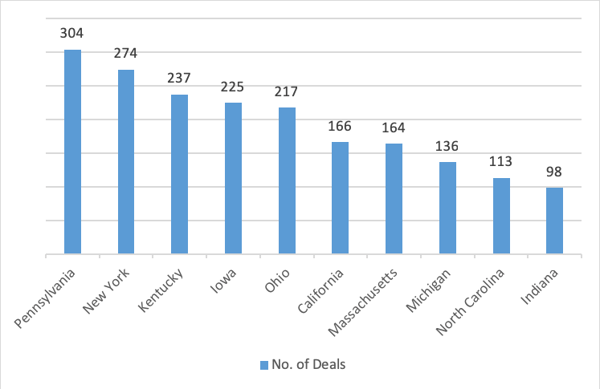 The largest economic incentive packages of 2018

As shown above, three of the largest incentive packages totaling $2.2 billion were offered to Amazon for HQ2 projects in Crystal City, Virginia, the Long Island City neighborhood in Queens, New York, and an Operations Center of Excellence in Nashville. In total, the company committed to create 55,000 new jobs and invest $5.423 billion. For comparison purposes, these packages are approximately half of the package Foxconn received in 2017 for creating 13,000 jobs in Wisconsin.

The second largest economic incentive package of $700 million was offered by Huntsville, Alabama, to Toyota-Mazda for a joint venture between Toyota Motors Corp. and Mazda Motor Corp. to manufacture and supply automobile and automobile components. The project estimates investing $1.6 billion and creating 4,000 new jobs while launching production in 2021.

One noteworthy item is that New Jersey only represented one project in the top 20 largest awards; meanwhile, in 2017, New Jersey had eight out of the top 20 awards for the year. This is a clear indication that the state and newly appointed leaders are reducing the number of large Grow NJ incentives. Site Selection Group will be tracking how the state alters or replaces the Grow NJ program after it expires in June 2019.