Site Selection Group estimates that in 2017 more than $10.12 billion in economic incentives were offered to attract various projects in the United States ranging from office projects, such as headquarters and data centers, to industrial facilities, including manufacturing plants and distribution centers. While economic incentives continue to be scrutinized and heavily debated, there is no doubt that they continued to be utilized by states to attract and retain business.

As of the date of publication, Site Selection Group identified 2,613 economic incentive packages offered to companies across the United States during calendar year 2017, valued at $10.12 billion in incentives.  This is comparable to the 2016’s number of projects at 2,487, but the value is significantly higher with over $3.4 billion more in incentives offered in 2017 over 2016’s $6.7 billion.

Not surprisingly, the combined award of $4.2 billion for Foxconn Technology and Exxon Mobil accounts for most of the differential in overall economic incentive packages from 2016 to 2017.

The most utilized type of economic incentives offered during 2017 continues to be tax credits followed by grant/subsidies and then loan/credits.

Manufacturing continued to be the most awarded industry function as shown in the chart below:

The following chart depicts the 2,613 projects broken out by estimated economic incentive values: 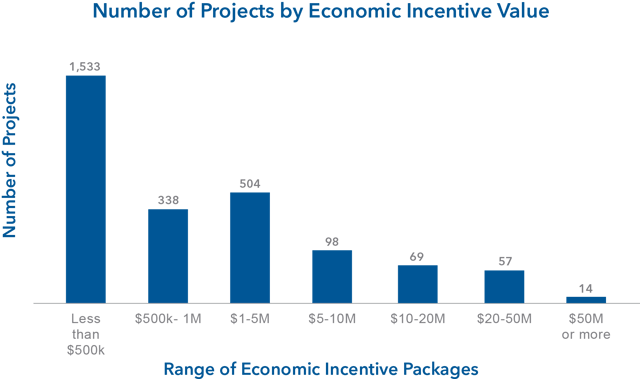 The chart below shows the top 10 states for the number of economic incentive packages offered during 2017 with a total of 1,809 projects, or 69% of the total number of announced projects, but represents only 30.4% or approximately $3 billion of total economic incentives value of $10.12 billion. 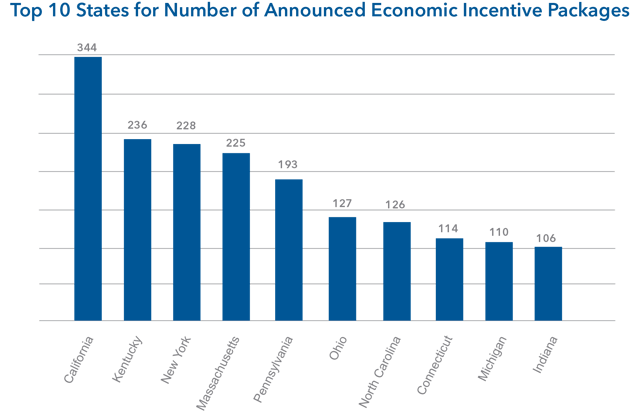 20 of the largest economic incentive packages during the year

The following table identifies some of the largest economic incentive deals offered, in various industry functions, in the third quarter of 2017. These projects provide a great way to benchmark what range of economic incentives exist for a variety of project types. However, it is important to understand the values are estimated and typically only reflective of state level incentives.

As shown above, the largest incentive package of $3 billion was offered to Foxconn Technology Co. for the construction of a display screen plant in commercial vehicle tire plant in Racine County, Wisconsin.  The company will create 13,000 new jobs and invest $10 billion. This package is dramatically larger than the 2016 largest incentive of $595 million, offered to Continental Tire of the Americas for the construction of a commercial vehicle tire plant in Hinds County, Mississippi. For additional information on the Foxconn project, see my article at: https://info.siteselectiongroup.com/blog/foxconn.

The second largest economic incentive package of $1.2 billion was provided to Exxon Mobil Corp. to build the world’s largest ethylene cracker plant in Portland, Texas, where they will create 400 new jobs and invest $9.3 billion. The third largest project of $208 million was awarded to Apple to construct a data center that will run 100% on renewable energy in Waukee, Iowa. The company will create 50 new jobs and invest $1.4 billion. These three projects in isolation were awarded approximately 44% of the total incentives awarded and represent approximately 3% of the overall jobs created and 26% capital invested for projects reported in 2017.

In addition, some notable 2017 projects garnering economic incentives in the business services and call center industry functions are as follows:

Please note that the analysis above is based on publicly available data at the time of this article and typically only reflective of state level incentives.