When comparing the third quarter of 2018 with Q3 2017, this quarter had significantly less incentives in terms of the overall value with $1.5 billion compared to $4.2 billion. The differential is due to two major announcements last year, Foxconn Technology garnering $3 billion in incentives from Wisconsin and Apple securing $208 million from Iowa.

The 489 announced economic incentive packages represented 40 states, led by Iowa with 86 deals and Kentucky with 54. The number of announced projects in the third quarter in Iowa was higher than usual based on the multitude of announced U.S. Small Business Administration loans. New York and Nevada offered the largest value of economic incentives with $215 million and $182 million, respectively.

The following chart depicts the 489 projects broken out by estimated incentive values: 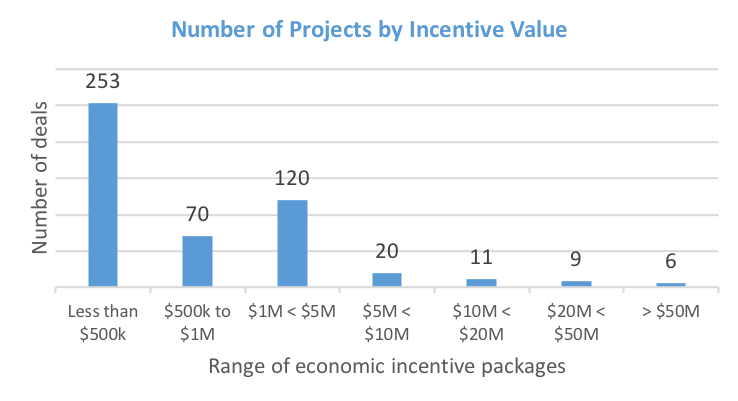 The top 25 economic incentive packages announced in the third quarter represent approximately $1 billion of the total $1.5 billion of estimated incentives, almost 68%.  These projects in isolation will account for:

20 of the largest economic incentive packages in the third quarter

The following table identifies some of the largest economic incentive deals (removing real estate development and film incentives) offered in the third quarter of 2018. These projects provide a great way to benchmark what range of economic incentives exist for a variety of project types. However, it is important to understand the values are estimated and typically only reflective of state-level incentives.

Each of the two largest announced economic incentive awards received over $100 million of estimated incentive value. In Nevada, Bigelow Aerospace was awarded sales tax and personal property tax abatements with a combined estimated value of $159 million, which is valued based on its sizable investment of $6.5 billion to develop and manufacture the company’s spacecraft. The second largest package was awarded by New York in the amount of $140 million to Regeneron Pharmaceuticals, consisting of $70 million through the New York Excelsior Jobs Program and $70 million from Empire State Development.

An interesting variation when comparing the top 20 projects by quarter is that there is a greater representation of states offering economic incentives this quarter. For example, Michigan and Oklahoma had sizable non-real estate announced projects in the top 20. Other states, such as New Jersey, which we see represented often in the top 20, is only listed three times.

There were also quite a few announced headquarters projects, of which five of the six in the top 20 deals were for plans to relocate within the same city or state, or both. The anomaly was “Project Cardinal” now known to be VF Corp., The North Face’s parent company, to relocate their global headquarters from Greensboro, North Carolina, to Denver. The company was awarded $27 million in performance-based tax credits through the Colorado Job Growth Incentives Tax Credit program for creating 800 new jobs and investing $100 million.

Notable awards in the business services industry during the third quarter

Not all projects are mammoth. Thus, we like to share notable third-quarter projects garnering economic incentives in the business services industry:

The following chart depicts the breakdown of the 489 announced projects during the third quarter of 2018 by industry sector:

We continue to routinely monitor announced projects to help companies estimate the level and kind of economic incentives that may be applicable to future projects. Please note that the analysis above is based on publicly available data at the time of this article. In addition, the current quarter’s data is compared to the information available at the time of prior quarterly articles.