The largest economic incentive package of over $600 million was offered to commercial real estate firm Bedrock Management Services for a $2.1 billion large mixed-use development in Detroit. The largest economic incentive package offered to a non-real estate firm was to Facebook for a new 1 million- square-foot data center in Eagle Mountain, Utah, for over $150 million in economic incentives. Facebook’s project is estimated to invest $850 million in capital and create 50 jobs, giving the company a net benefit of $3 million per position.

The 538 announced economic incentive packages represented 34 states, led by California with 96 deals, Massachusetts with 91 and Ohio with 56. The states that announced projects with the largest value of economic incentives offered, aside from Michigan and Utah (projects noted above), include California with $183 million due to California Competes award announcements made in the second quarter, New Jersey with $111 million and Connecticut with $101 million.

The following chart depicts the 538 projects broken out by estimated incentive values: 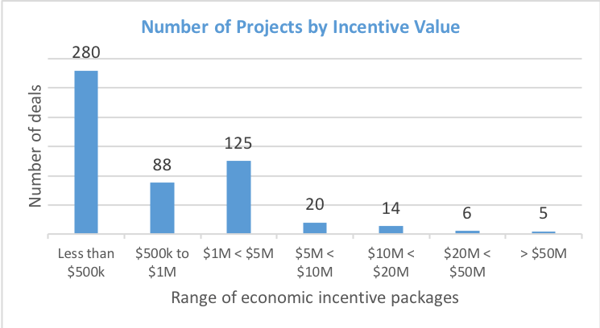 The top 25 economic incentive packages announced in the second quarter represent approximately $1.37 billion of the total $1.9 billion of estimated incentives, over 72%. These projects in isolation will account for:

Facebook’s $150 million incentive deal is due to the property tax incentives estimated for the first two buildings over the next 40 years.  Should the company decide to expand further, this benefit could be significantly larger. In addition, the $150 million estimate does not include the multimillion-dollar sales tax savings the company will enjoy due to a 2016 legislative change that expanded sales tax exemptions to include data centers. The Utah sales tax exemption is specific for a new operation constructed in Utah after July 1, 2016, with a minimum building size of 150,000 square feet.  Facebook will be the first company to utilize the new sales tax exemption.

20 of the largest economic incentive packages in the Q2

The following table identifies some of the largest economic incentive deals (removing real estate development incentives) offered in the second quarter of 2018. These projects provide a great way to benchmark what range of economic incentives exist for a variety of project types. However, it is important to understand the values are estimated and typically only reflective of state-level incentives.

In addition, some notable second-quarter projects garnering economic incentives in the business services and call center industry functions are as follows:

The following chart depicts the breakdown of the 538 announced projects during the second quarter of 2018 by industry sector: