The $64.3 million package was offered to Blue Origin to build a new facility to manufacture BE-4 rocket engines in Huntsville, Alabama. California had the most announced economic incentive projects during the quarter with 127 deals valued at approximately $119 million through the use of the California Competes Program.

The top 25 announced economic incentive packages amounted to approximately $542 million, or 52.7% of the total incentives offered in the quarter. Of the top 25 deals, six or 24% were located in New Jersey.

The largest project in terms of the number of jobs to be created during the second quarter is NTT DATA Services, which operates as an information technology services company. NTT Data plans to create 6,377 jobs and invest $28 million to establish its new North American headquarters in Plano, Texas. The company was awarded a $7.5 million grant through the Texas Enterprise Fund Program.

The 581 announced economic incentive packages represented 32 states, led by California with 127 deals, Pennsylvania with 88 and Kentucky with 48. The states which included projects with the largest amount of capital investment include Kentucky with $1.94 billion, Louisiana with $1.35 billion, California with $1.3 billion, Michigan with $872 million and Indiana with $658 million.

The top 10 states based on the total number of announced economic incentive packages, which represent 463 of the 581 projects, is shown in the table below: 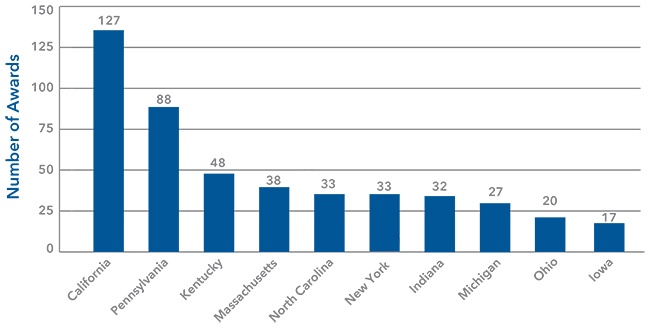 It is not surprising to see a number of announced economic incentive packages in California because the California Competes Program issued award announcements during the second quarter. With the exception of New York, these are the same states that accounted for the top 10 states in terms of number of announced economic incentives packages in the second quarter 2016.

While the average incentive package was valued at $1.77 million for all 581 announced projects, the average award for the top 25 deals was $21.69 million. The following chart depicts the 581 projects broken out by estimated incentive value: 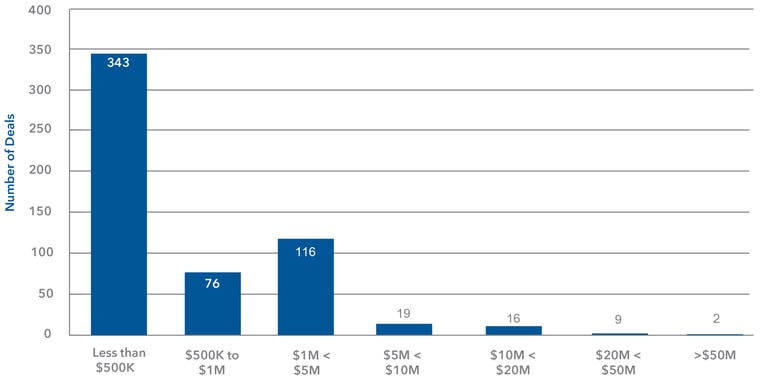 The top 25 economic incentive packages announced in the second quarter represent approximately $542.2 million of the total $1.02 billion of estimated incentives, over 52%.  These projects in isolation will account for:

For the top 25 projects listed above, the following graphs reflect the project type, number of projects by state and industry function: 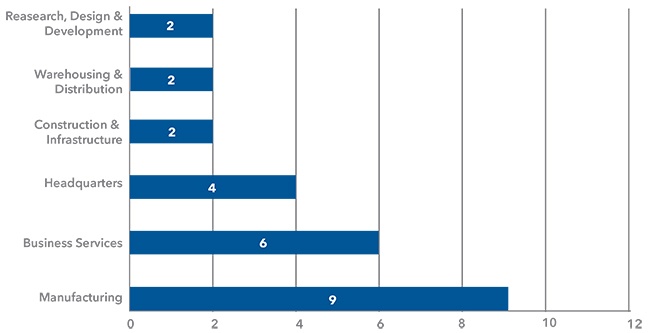 In this quarter, California Competes Program continued to be leveraged by companies and accounted for 127 of the 581 projects in terms of the number of incentives deals. The top two awarded projects were in Alabama and North Carolina, accounting for $118 million in economic incentives or approximately 21.8% of the top 25 deals and 11.5% of the overall incentives awarded in the second quarter of 2017.

As mentioned above, Blue Origin, which designs, develops and manufactures spaceflight systems, plans to build a new 400,000-square-foot production facility to manufacture its BE-4 rocket engine in Huntsville, Alabama. The company will create 342 new jobs paying an average annual wage of $75,000. The company has been offered a total of $64.36 million in incentives, including an incentive of $3 million from the Alabama Industrial Development Training (AIDT) Program, an investment credit worth $30 million over a 10-year period, a jobs credit worth $8.71 million over a 10-year period, a 20-year property tax abatement worth $647,745 and $10 million for the reimbursement of eligible capital costs. The city of Huntsville provided an incentive of $11 million to support the project. Blue Origin will also receive an incentive package of $1 million from a joint governmental group, composed of the city of Huntsville and the Madison County Commission.

The next largest economic incentive package was provided to Credit Suisse Group, which provides various financial services. The company plans to invest $70.5 million to expand its current campus in Raleigh, North Carolina, and create 1,200 new jobs. Credit Suisse has been awarded a $40.5 million grant over a 12-year period through the North Carolina Job Development Investment Grants (JDIG) program and a $13.4 million grant through the North Carolina Industrial Development Fund Utility Account program.