Global call center industry growth continues across all regions
The call center industry continues to shift jobs to and from onshore, nearshore and offshore geographies. With the current trend of onshoring taking center stage, the United States led overall growth with 223 projects announced with 66,069 jobs due to strong economic conditions and corporate reshoring initiatives. Outside the United States, the Philippines had the highest number of openings and expansions reported with only 45 total announcements that created 60,026 jobs. Nearshore destinations in Latin America and the Caribbean also incurred significant growth by creating 16,994 jobs at 31 announced projects. The following graph summarizes the growth of call centers across the world: 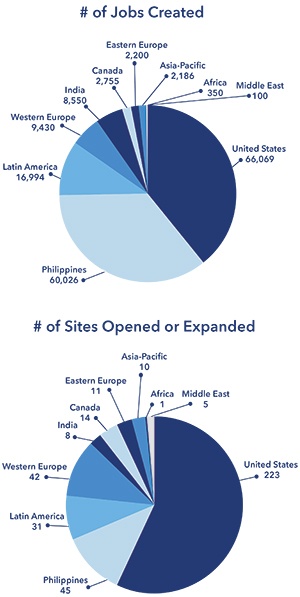 Onshore call center growth remained stable and created over 66,000 jobs
The expansion of onshore call center operations in the United States continued during 2016. As in years past, many companies reshored operations from the Philippines and other offshore markets as they sought to improve quality levels despite higher costs. Site Selection Group estimates that 223 call centers opened or expanded within the United States. These centers created 66,069 total jobs, which has caused many labor markets to become tighter and put wage pressure on employers. The Southeast and Southwest regions of the U.S. accounted for the majority of the growth generally due to more attractive labor conditions, lower operating costs and availability of economic incentives. The following graph provides a summary of expansion data by region within the United States.

Nearshore Latin America region continues to grow due to low cost structure, accessibility, bilingual skills and political stability
Latin America has now become a serious contender in the site selection game over the last decade. Companies are actively setting up operations in the region. Most of these projects stem from the need to consolidate pan-Latin America operations or serve customers in high-cost locations such as the United States. Within Latin America, Central America countries such as Costa Rica, Guatemala, Nicaragua and Honduras along with the South American country of Colombia has been very active while similar activity has been seen in Caribbean countries such as Jamaica and the Dominican Republic.

The Philippines dominates offshore region but growth is slowing
The Philippines continues to maintain its dominance in the offshore marketplace for voice-related call center operations. The region has successfully attracted higher-end non-voice operations such as software development, shared service centers and other knowledge processing operations. The growth of these back-office operations in the Philippines is creating new challenges for companies trying to attract the best talent, reduce employee attrition and control labor costs. As a result, many companies are expanding beyond Manila to next-wave emerging cities such as Baguio City, Dumaguete City and Santa Rosa where labor costs and competition are less.

Conclusions
Finding the optimal location for expansion continues to be a complicated question and requires extensive analysis to figure out the right answer. Based on the analysis conducted by Site Selection Group, it is clear that the United States, the Philippines and Latin America have been established as the dominate geographies for an onshore, nearshore and offshore global footprint for U.S.-based companies; however, Eastern Europe, Africa and India continue to serve a role for companies needing additional languages or other skills sets beyond voice-related call center operations. To learn more about call center location trends, download the Global Call Center Location Trend Report or contact one of our global call center site selection experts to find the optimal location for you.